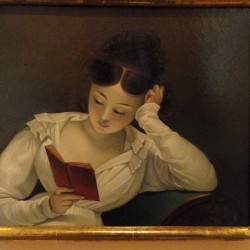 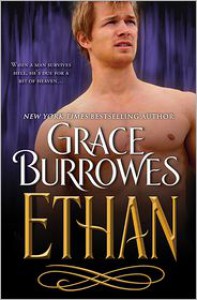 Grace Burrowes has upped her game with Ethan, giving the reader an intriguing plot with surprising twists populated by fully-developed, complex characters. Actually, there are two not so fully-developed characters – Ethan’s sons, Jeremiah, age six, and Joshua, age five. Be warned – if you don’t like children in your historical romance stories, this book is not for you. Me, I like adorable children mixing it up with the adults, and for sure these two boys are adorable.

Ethan Grey is the eldest son of the Earl of Bellefonte, but he is not the heir, as his mother was not married to the earl. Nevertheless, he grew up in the Bellefonte home with his eight half-siblings, one of whom, Nicholas, is the heir and the hero in Burrowes’ previous novel in the Lonely Lords series. At age 14, Ethan was sent off to a harsh public school and then to Cambridge. He married a woman who was his mistress, but she died after giving birth to the two boys. Ethan threw himself into his business ventures, and his successes have made him quite wealthy. He and the boys live quietly at Tydings, his Sussex estate.

As the story opens, Jeremiah and Joshua are visiting at their Uncle Nick’s Kent estate, Belle Maison, along with various other children and their parents (don’t even try to figure out who they all are; this is Grace Burrowes, so you can never quite know who all the players are). The children are in the charge of governess Alice Portman, who looks like every other governess – shapeless grey dress, severe bun, and spectacles. As it turns out, Alice is looking for a change in position, and Ethan needs to replace the boys’ recently departed tutor, so Alice returns to Tydings with Ethan’s family.

Alice quickly realizes that although Ethan loves his sons he doesn’t actually show them love. He devotes himself to business and lets others tend to the boys. Alice insists, however, that Ethan take more interest in his children, and he begins to enjoy being a father. He also begins to enjoy being in Alice’s company.

Alice may be the one who looks wrapped up and closed off, but it’s really Ethan who has shut himself off from the world. He is somewhat estranged from his siblings, even though he and Nick were very close as children. Nick, who has succeeded to the earldom, has been trying to rekindle those feelings, but Ethan remains aloof.

There is a lot going on beneath the surface. In addition to suffering from being a bastard son, Ethan endured horrific bullying at school, a trauma that still haunts him. Alice also endured heartache and physical injury in her teenage years; she has dealt with her trauma by leaving the family home and working as a governess even though her family is well off. Years later, both Ethan and Alice still are grappling with tremendous feelings of unresolved guilt. (It is rather too neat that both of them were tormented by the same man.)

I won’t go into the details of the plot developments because there are some well-done surprises, including a story line that I have not seen in historic romance before. Of course, there is growing affection between Ethan and Alice, and between Ethan and his boys. Various neighbors and relatives pop in from time to time – some of them from previous books and some from books yet to come – and some play an important role in unfolding events. The villain makes his appearance and get his comeuppance.

The real beauty of this story, however, is in the exploration of the effects of traumatic experiences on these two people and the exposition of how they begin to heal. As I’ve always said, Grace Burrowes is a wonderful storyteller, and in Ethan she tells a story of abuse, escape, healing, reconciliation, and love – both romantic and familial.

I thoroughly enjoyed this book and highly recommend it. One need not have read any of its predecessors to get pleasure from it.